Water damage is one of the most common types of property insurance claims. Most standard homeowners insurance policies exclude certain water damage types like flooding or sewage backup, there is still coverage for other water-related perils like a burst pipe. Policyholders with both dwelling and personal property coverage should be protected against water-related damages.

Merlin Law Group has represented many policyholders with water damage claims to their homes and businesses. As The Policyholder’s Advocate™, we are committed to helping you obtain justice so that you can get back on the path toward recovery.

Get a free case review

Our Water Claim Attorneys Are Here To Answer Your Questions

“A general and temporary condition of partial or complete inundation of 2 or more acres of normally dry land area or of 2 or more properties (one of which is the policyholder’s) from:

Most policies will not provide coverage for damage because of a sewer or drain backup or a failed sump pump. Your policy may include added endorsements that allot coverage for sewer, drain, or sump pump backups up to a limited amount of money. It is important to read through your policy to determine the scope of your water damage coverage and any possible exclusions that may exist. Another option is to purchase a rider for sewer backup damage.

Anti-concurrent clauses prohibit recovery when a covered peril and non-covered peril combine to cause a loss. For example, if your home sustains wind (covered) and flooding (non-covered) damage due to a hurricane, your insurer will deny your claim regardless of the existing wind coverage. Be sure to read through your policy to determine whether there are any of these clauses.

Water that accidentally discharges from a broken appliance may be covered under your homeowners insurance policy. Frozen pipes may also fall under your policy’s coverage, but there are often conditions attached such as maintaining heat in your home or properly winterizing your home.

A water exclusion clause restricts certain forms of water damage from being covered under an insurance policy. These clauses limit the water-related claims an insured can successfully make. Damage caused by flooding, standing water, groundwater, and drain or sewage backup typically fall under exclusion clauses.

Damage from snow, collapsed roofs from ice dams, and wind-driven rain may potentially be covered if the damage is proven to be a cause of a covered peril or weather condition.

Mold — A common aftereffect of water damage that can lead to further damage to both the property and any of its inhabitants. We recommend making the necessary repairs as quickly as possible to avoid any potential health risks. If mold is determined to be a result of neglect or gradual deterioration, your insurer will likely not cover any damage associated with it.

Decay — Relates to the breakdown of the quality of an object. In this case, foundational materials can decay as a result of water damage. This decay could attract other issues like termites and carpenter ants, thus creating more damage to your property.

Roof Collapse — For those in regions with snowfall, there is an increased risk of roof collapse due to the weight of snow. Snow is made up of water and one inch of water weighs approximately 5.2 pounds per square foot. Your roof becomes increasingly prone to collapse as more weight accumulates on top.

Ice Dams — Another potential source for roof damage and is caused when the warm air that circulates through a house meets the ice and snow on a roof causing the bottom layer to melt. Water then flows toward the edge of the roof, an area often poorly supported and without warm air underneath it. This water eventually freezes at the edge and the continued water flow will work its way under your roof shingles. From here the overflow water trickles down into your ceiling and potentially your home. 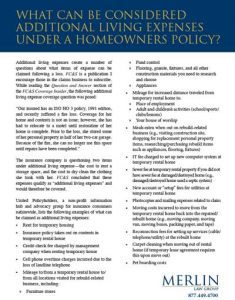 What Can Be Considered Additional Living Expenses Under a Homeowners Insurance Policy?

Additional living expenses create a number of questions about what items of expanse can be claimed following a loss. FC&S is a publication I encourage those in the claims business to subscribe. 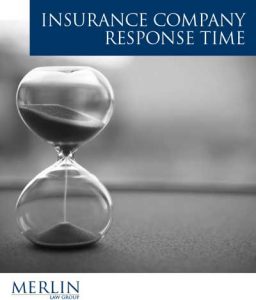 When your home or business suffers damage due to a natural disaster, your life can change quickly. Insurance companies are there to help you through this peril, but the wait between the disaster and getting back to normal can be agonizing. 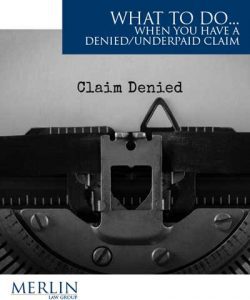 What to Do When You Have a Denied/Underpaid Claim

Having your property insurance claim denied is not the end of the road. Unfortunately, it is the last thing you want to hear after a disaster leaves your home or business damaged, but it is merely another step in the process towards recovery. 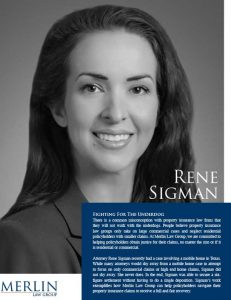 Fighting For The Underdog

Attorney Rene Sigman recently had a case involving a mobile home in Texas. While many attorneys would shy away from a mobile home case in attempt to focus on only commercial claims or high end home claims, Sigman did not shy away. 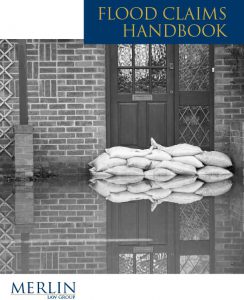 Flood insurance is a necessary component of complete hurricane protection. Our Flood Claims Handbook discusses this type of insurance and has helpful information. 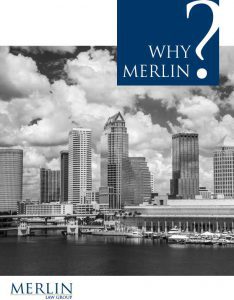 Since 1985, Merlin Law Group has aided policyholders achieve recovery with their property insurance claims. We have created an eBook detailing what Merlin can bring to the table in terms of legal representation. Don’t let insurance companies lead you to a second disaster — allow Merlin Law Group to help! 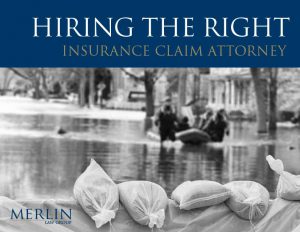 It is important you find an attorney that will be aggressive in obtaining justice for you. Merlin Law Group’s attorneys have the experience and skillset required to help policyholders receive their entitled coverage benefits. Check out our eBook on what to look for in a property insurance attorney to see if we would be a good fit for you. 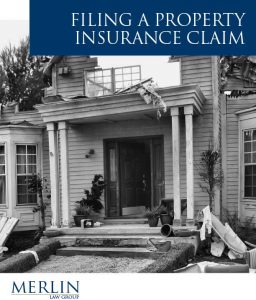 Filing a property insurance claim can be confusing if you have never had to do it before. We created this helpful asset outlining the process.